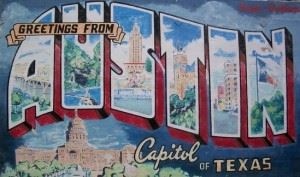 All across the United States, there are way too many towns and cities with the same big box stores, chain restaurants, and strip malls, and more seem to be popping up every year. If not a disturbing trend, it’s certainly a boring one. Why does everything have to look the same anyway? Whatever happened to American ingenuity and creativity? This nation needs more out-of-the-box thinking, more excitement, more weird. It needs more places like Austin, Texas.

Weirdness is a point of pride for the citizens of Austin. In fact, a popular slogan that’s thrown around the city is “Keep it weird.” And that they are. You can see all kinds of interesting sights in the capital city, from marvelous natural wonders to a strangely beautiful cathedral made entirely out of junk. Here are some of the weirdest spots in Austin you should check out.

Here’s a surprising fact: Austin is home to one of the largest urban populations of bats in the United States. Approximately 1.5 million Mexican free-tail bats can be witnessed coming out from beneath the bridge in droves every night from mid March to early November. Formerly viewed as pests, the bats have been embraced by locals and tourists alike as one of the city’s main attractions. You can catch a sighting on a kayak or a tour boat if you don’t have the energy to hoof it all the way to the bridge.

Vince Hannemann is a mild-mannered, down-to-earth Austin denizen who just happens to have the incredible Cathedral of Junk in the backyard of his small suburban house. His weird building project began in 1988. He’s accumulated more than 60 tons of junk since then. Incorporated into the structure is a wide variety of items that would normally be cast aside or thrown away: old beer signs, clocks, lawnmower wheels, car bumpers, kitchen utensils, circuit boards, and the list goes on. Some of Vince’s neighbors have repeatedly filed complaints with the city, finding the Cathedral an eyesore. However, the Cathedral still stands to this day and is considered by many Austin locals not as a pile of garbage but rather as a work of art.

After you’ve checked out some of Austin’s signature sites, you’ll probably need to make a pit stop to fill up on some good eats. Go to the trailer park. Yes, a trailer park. Before you furrow your brow, remember that this is only par for the course in Austin. Plus, the food at the South Austin Trailer Park Eatery is really good, too. Grab a few Trailer Park tacos – an unconventional culinary creation that involves fried chicken, green chilies, lettuce, pico de gallo, and cheese on a flour tortilla with poblano sauce.

When in Austin, be sure to relax, open your mind, take in the various sights and sounds, and just enjoy the weirdness. You might just embrace the weirdness yourself.