The 2016 Presidential election is acting as a spur for tens of thousands of immigrants to rush to seek citizenship, according to the latest figures on naturalization.

Seeking citizenship can be a long and complex process, we explain on our Texas immigration attorneys’ website.

The New York Post reported many of the immigrants “fear being shipped out” if Donald Trump, the GOP front-runner ends up becoming President, sparking the rush to naturalization. They also want to vote in the election. 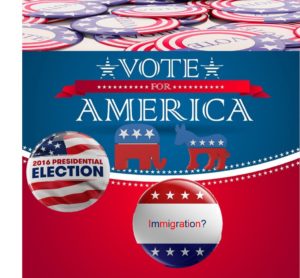 Associated Press reported on how naturalization applications increased by 14 percent in the second half of 2015 compared to the same period in the previous year. It coincided with the period that Trump built up a commanding lead in the GOP primaries.

The New York Post quoted Maria Ponce of iAmerica Action, a national immigrant rights group who said “fear” of a Trump Presidency was the driving factor behind the surge toward naturalization.

Mass deportation is a major platform of Trump’s campaign. He has pledged to deport 11 million undocumented immigrants and to build a wall between the United States and Mexico to deter illegal immigration.

The Post reported there about 9 million green-card holders in the United States who are eligible to become U.S. citizens. Around 4 million of them are from Hispanic backgrounds.

The process to become a U.S. Citizen can be a complex one and there are inherent dangers in rushing it. There are a number of routes to citizenship. Naturalization is one of the most common ones. An immigrant must be 18 or older, a permanent resident, of good morals, and have a basic grounding in the history and government of the United States. U.S. Citizenship and Immigration Services sets out the requirements in further detail in its policy manual.

Legal permanent residents can apply to become U.S. citizens if they’ve been in the United States for five years, complete a 21-page application form, submit to finger printing, pass an English and Civics test and pay $700 in fees.

The complexity of the process means people who only embarked on the citizenship process in the last few weeks, may not make it in time to vote in November’s presidential election.

Our firm can help you in the citizenship process. Our lawyers are experienced at applying the laws of citizenship to applicants and in helping to answer questions about good moral character, citizenship through parents or failed applications.

At Peek Law Group, we are ready to answer any questions or concerns you have regarding your eligibility for citizenship and to help you with the complexities of the process. To speak to a representative, call us at  (512) 399-2311.