Drug crimes frequently make headlines in Austin and elsewhere in Texas. In January, police said they discovered 65 pounds of liquid meth in the gas tanks of a woman’s car.

She was reported to be traveling from Mexico to the Dallas area.

The TV station KVUE reported Maria Bermudez Gutierrez, 45, a Mexican national, was pulled over by police officers for a traffic stop on Interstate 35.

Austin police said they discovered 65 pounds of liquid methamphetamine in the gas tank of her car. Officers said she failed to remain driving in her lane.

Police questioned Gutierrez and found inconsistencies in her reasons for traveling to the United States. 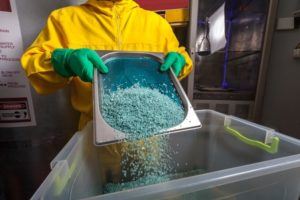 They asked Gutierrez if they could search her car and she complied, according to media reports.

Investigators said they discovered anomalies in the woman’s gas tank. They brought in a K9 team to search the vehicle for narcotics. After the K9 alerted police to the potential presence of drugs inside the tank, police called out a mechanic to inspect it.

Drugs officers said they discovered liquid crystal meth, with a street value of $2.6 million. It was concealed behind a partition in the gas tank of the car, stated police.

They said the quantities of liquid meth found could have impacted the Dallas community. Sgt. Greg White, Supervisor for the Organized Crime Division at Austin’s Police Department said:

“It’s a very dangerous drug. Not only for the health hazards, but [it’s] very addictive and leads to further crimes — you know people committing robberies and burglaries to support the drug habit.”

Gutierrez was booked in at the Travis County jail. She was later transferred to federal custody. The Drug Enforcement Agency is investigating the incident.

Liquid Meth – When Drugs Offenses Are Prosecuted as Federal Crimes

Many drugs offenses are dealt with at a federal level.  These include drug trafficking offenses which we describe here.

Drug trafficking carries very severe penalties. Typically drug traffickers are sentenced to at least 10 years in prison. The only drug offenses that are not deal with at a federal level are usually possession crimes.

Depending on the amount of an illicit drug in the defendant’s possession, the penalty for possession can range from a third-degree felony up to a first-degree felony. Read more about our experienced drugs defense here.

If you have been charged with a drugs offense call our Austin criminal defense lawyers today at (512) 399-2311.