Alien smuggling is seldom out of the headlines. Federal authorities are looking into claims that active duty soldiers were running an operation in Texas.

The authorities are looking into an illegal immigrant smuggling operation allegedly ran out of Fort Bliss in El Paso, Texas by soldiers, reported KFox14. 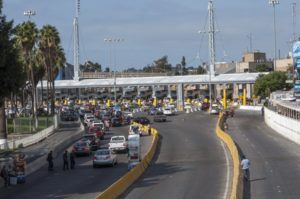 The Mexican border at Tijuana

The report said two U.S. soldiers, Marco Antonio Nava, Jr. and Joseph Cleveland, were recently arrested at a checkpoint and accused of trying to smuggle two Mexican citizens into the United States. The citizens were in the back seat of their car, the report stated.

The soldiers were reported to be with 377 TC Company at Ft. Bliss. They were not wearing military uniforms at the time.

The report claimed there is a possible smuggling ring at Fort Bliss involving other soldiers. It suggested soldiers were paid $1,000 cash for each successful smuggling trip and they dropped the Mexicans off at a house north of Houston.

Border patrol agents started investigating the activities of the soldiers over the summer, the report stated.

Alien smuggling is dealt with as a federal offense. Our Austin immigrant smuggling defense lawyers represent people charged with these crimes.

Alien smuggling is taken very seriously and can have terrible consequences. In September, a former fugitive was sentenced to three terms of life in prison after pleading guilty in an alien smuggling conspiracy. The operation resulted in two deaths and kidnapping.

Alien smuggling is dealt with under the U.S. Immigration and Nationality Act. (I.N.A.). This is a broad crime. It can be a crime to bring an undocumented immigrant into the country irrespective of whether the alleged smuggler is making a profit.

In some cases, a family member may not be aware he or she could face severe criminal sanctions.

If you have been charged with alien smuggling in Texas, you should hire an immigration and criminal lawyer as soon as possible. Call us today at  (512) 399-2311.