The nation’s immigration courts already face massive backlogs for deportation hearings. The pressures are predicted to grow further under the pro-deportation presidency of Donald Trump.

An article on 89.3 KPCC stated the burdens on the courts may grow exponentially over the next few months.

The station said America’s immigration courts were burdened by a backlog of half a million cases before Trump’s inauguration. The pressures in 2016 were unprecedented.

Cases being put on the calendar years from their initial hearing. More than 526,000 cases were stuck in the system stated the Transactional Records Access Clearinghouse at Syracuse University. California alone has 100,000 cases with wait times of 2-4 years. 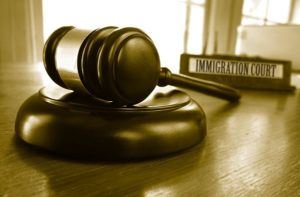 Last year, we noted Texas has one of the largest immigration case backlogs in the country.

The backlogs reflect an increased emphasis on deportations that took place under Barack Obama’s presidency. Trump has vowed to increase the size of the deportation force by employing an extra 5,000 Border Patrol agents and 10,000 immigration officers.

Jennifer Chacón, a law professor at the University of California, warned the crisis was likely to hit in 2017. She said:

“This is the year that the crisis really came to a head. We’ve had growing backlogs, but people are getting their cases calendered for years from now.”

Reports also point out there are too few judges to cope with the demands facing the immigration courts.

We noted there are just six immigration judges on the bench in Houston. The immigration court’s caseload is predicted to double by 2019 without more judges being taken on.

Funding for the immigration courts has continuously lagged behind that of federal enforcement, according to the Houston Chronicle. The publication states the courts are still struggling with the mass migration from Central America to the United States in 2014 when many unaccompanied children flooded over the border.

The pressure on immigration courts has made legal proceedings involving undocumented immigrants increasingly stressful and fragmented families. Our Texas family immigration lawyers can help with your case. Call us today at (512) 399-2311.