The incident at a pool party gained notoriety. It was captured on social media videos and made national news headlines.

The Star-Telgram reported how David Eric Casebolt, a former police officer, chased black teens and ordered them to the ground.

Casebolt, who is white, was seen forcing the teen girl, Dajerria Becton, onto her stomach and placing his knees on her back.

The officer also caused outcry at the pool party when he pulled out his firearm as two young black men charged forward to complain about the girl’s treatment. He holstered the weapon when two other officers intervened.

About a dozen officers responded to a 911 call related to an apparent disturbance at the pool. There were about 100 teens at the pool and a fight had been reported.

Casebolt resigned from the police department less than a week after the incident. McKinney Police Chief Greg Conley branded his actions at the pool “indefensible” and said he lost control of the incident.

The federal complaint follows the decision of a grand jury not to indict Casebolt in the summer of 2016. 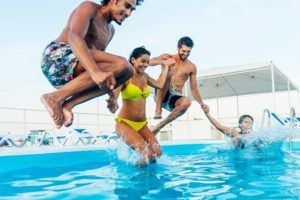 The lawsuit claims the officer used excessive force, committed an assault and unlawfully detained a minor child. The lawsuit also accused the city of McKinney and police officials of failing to provide McKinney officers with adequate training and lacking a direction to protect residents from having their rights violated by police officers.

In past years, the City of McKinney was the subject of a lawsuit that accused its officials of imposing racial segregation in public housing.
The rapid growth of social media has given a wider forum to police arrests and led to mass outcries at heavy-handed tactics. Last year police were accused of racism and a series of arrests led to the deaths of young black men.

In December 2016, the arrest of a black mother by a Fort Worth police officer sparked a social media backlash.

Jacqueline Craig told an officer she called the police because a neighbor grabbed her son. After an argument, she was wrestled to the ground and arrested by the white police officer on charges of resisting arrest and failure to identify.

Reports said she was also arrested on warrants from the Irving Police Department for traffic charges.

Excessive force is a significant problem linked to police officers across the county. In January, former US Attorney General Loretta Lynch said the Chicago Police Department unconstitutionally engaged in deadly and excessive force over a considerable period.

Her press conference concluded a 13-month federal probe into a department that has been under heavy criticism over officer-involved shootings.

As Austin criminal defense lawyers, we are always concerned to hear about police using excessive force. Intimidation by police officers can be physical or verbal. A DWI suspect might be coerced or bullied into a breath test or stopped without proper cause.