Crimes against police are seldom far from the headlines in Texas after a tragedy last year and a move to make acts of violence against first responders hate crimes.

In April, another police officer lost his life when a Harris County deputy constable was gunned down in Baytown.

Police said Clint Greenwood’s killer later used the same gun to shoot himself dead and had a grudge against the officer.

Greenwood was killed on April 3 when he arrived at work at the Harris County courthouse annex in Baytown. He started work three months earlier as an assistant chief deputy for the Precinct 3 Constable’s Office. The officer worked for decades in the criminal justice system in Harris County. 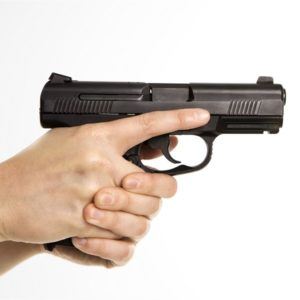 Police linked the shooting to William Kenny, reported the Houston Chronicle. Kenny reportedly harbored a grudge against Greenwood and other officials after deputies responded to a call in five years ago. He had a legal permit for concealed carry in Texas and bought a 9mm Taurus in 2014.

He shot himself in the head soon after the killing of the officer. Ballistics tests used to compare the rounds used in the two shootings established a match.

Over the last year, we have seen the killings of police officers in Dallas, San Antonio, and Harris County, prompting moves for Blue Crimes Matter legislation.

Crimes Against Police in Texas

In the wake of the slayings of five police officers by a sniper in Dallas last year during a Black Lives Matter rally, Texas Governor Greg Abbott called for the killing of Texas police officers to become a hate crime.

Legislation filed in Texas this year would make violent offenses that target any emergency responder a hate crime.

Blue Lives Matter legislation has been implemented in Louisiana. However, the use of heavy sentences for less serious crimes against police officers is controversial. In Louisiana, for example, resisting arrest can constitute a hate crime, reported the Washington Post.

In at least 37 states there are enhanced penalties for assaulting a police officer.

If you have been charged with an offense against a police officer or another first responder such as a paramedic or a firefighter, you may be facing a heavy sentence. Call Peek Law Group for a consultation at (512) 399-2311.