Football players frequently get into trouble with the law. Earlier this year, Dallas Cowboys’ linebacker Damien Wilson was charged with aggravated assault.

Wilson was arrested and charged with two counts of felony aggravated assault with a deadly weapon, according to the Frisco Police Department.

Police said an incident occurred in the Toyota Stadium parking lot during a Freedom Fest event in Frisco in early July. Police said in a report the player backed his truck into a woman while he was parking at the stadium before showing a rifle to a man, “causing him to be in fear.”

A report on NBC Sport derived from the affidavit stated a man flagged down police officers to tell them a man hit his sister-in-law with a car. He said she was trying to hold a parking spot for relatives. He said the man took out an AR-15 that was eventually returned to his vehicle. 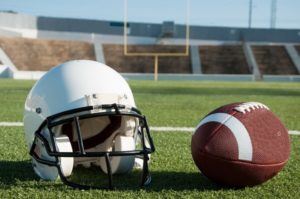 He identified Wilson, who initially denied the claim before admitting “road rage” caused him to take out his gun, the affidavit stated.

Wilson was later released from Frisco Detention Center after posting $20,000 bond. The case remains under investigation, according to police.

The incident left Wilson open to discipline by the NFL under the league’s personal conduct policy.

The Star-Telegram reported the club was taking a ‘wait and see’ approach over possible disciplinary action.

“I just think in any situation this day and time, you have to gather all the facts before you do anything. I’m sure most people walking benefited from getting the benefit of the doubt and a second chance.”

NFL players often end up with criminal records. A recent report in the New York Times stressed one NFL player in 40 is arrested in any given year.

Drunk driving following by domestic violence is the most common offense among NFL players, according to the report.

From 2000 to 2014, 202 players were charged with DWI or DUI, according to the report. It found 88 players were convicted of assault and battery and 85 of domestic violence over the 14-year period of the study.

Many Dallas Cowboys and former players had run-ins with the law.

Larry Bethea, who played as a defensive linesman for the Dallas Cowboys in the 1980s was convicted of stealing from his mother. In 1987 he was found dead with a self-inflicted gunshot wound hours after being identified as a robbery suspect in Newport News, Virginia, reported the New York Times.

Aggravated assault is a serious crime in Texas. If you have been charged with an assault crime, please contact our experienced Austin criminal defense lawyers.