E-Verify is an online-based system that matches up information from your Form I-9, Employment Eligibility Verification, to federal records held by the Department of Homeland Security, Social Security Administration, and Department of State. These records are used to confirm that you are authorized to work in the United States.

An expansion of E-Verify is controversial 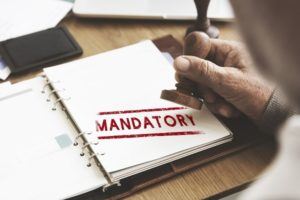 The verification system is meant to weed out undocumented immigrants who find work, even though they are not allowed to be employed.

Although this change is seen as a quick fix, many experts believe the extension of E-Verify to all new hires will be extremely costly and will lead to numerous problems and delays.

Issues were highlighted back in 2015 before Trump’s ascendancy. The Cato Institute noted that the Republican-led Congress was already eyeing measures to make all sure all new hires could be checked out by E-Verify.

The authors pulled no punches. They concluded:

“E-Verify is an intrusive labor-market regulation that places the onus of immigration law enforcement on American employers. E-Verify is expensive, and it has a startling degree of inaccuracy.”

The Downside of the E-Verify System

The paper looked at practical problems with the electronic verification system as well as privacy and civil liberties implications.

It is suggested E-Verify has been ineffective in weeding out undocumented immigrants in Arizona where it is widely used.

The analysis by Alex Nowrasteh and Jim Harper suggested the extension would see a huge growth in bureaucracy. They say it would add more than 13.48 man-hours spent by America’s employers in dealing with the complexities of the I-9 form.

Indeed, many American workers would find their new employment would be delayed due to inaccuracies in the system.

The report says the widening of the E-Verify system may also boost the black market in identity documents.

Another concern is it will result in a slippery slope to a national biometric identity card for all citizens and legal residents to assist workplace verification of immigration status.

The American Civil Liberties Union has taken a stance against E-Verify. The ACLU highlighted what it said were 10 big problems.

The ACL claimed a mandatory system creates a new level of intrusive government and oversight of daily life. It branded it a bureaucratic “prove yourself to work” system that hurts ordinary people.

Clearly there are many concerns about compulsory verification that impact businesses if the system is extended. At Peek Law Group , we advise employers who are seeking visas for immigrant workers as well as helping in a range of employment matters. Call us to help with your employment matter at  (512) 399-2311.