Migrants who have been persecuted for factors like race, religion and nationality can seek asylum in the United States. However, a recent court cause suggests membership of a gang is not an automatic qualifier for asylum.

Former gang members have argued their membership of these dangerous groups will put them in grave danger if they return to their home countries.

The ruling is pertinent to thousands of immigrants have headed north to flee gang-related violence in Central America. Academics say many of these people were forced to join gangs in their home countries.

Being a gang member is not an automatic reason for aslyum 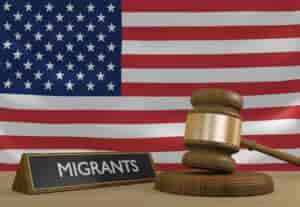 Fatma Marouf, a professor at Texas A&M University School of Law, said many of the asylum seekers from Central America were in gangs, often unwillingly.

The news channel KTTC reported on the ruling that stemmed from the deportation proceeding against a man from El Salvador. Wilfredo Garay Reyes escaped a gang in Central America and illegally entered the United States more than 15 years ago in 2001.

He was 18 at the time. He was shot in the leg by a gang leader who was unhappy at his defection. Garay sought asylum in the United States.

The categories of immigrants who are granted asylum are defined by United States Citizenship and Immigration Services (USCIS). They are people who might be threatened because of their religion, race, nationality, membership in a particular social group, or political opinion.

Gang Membership May Not Help With Asylum

Garay claimed a gang constitutes a “particular social group.” He warned the Mara 18 gang in El Salvador might use a preferred method of death on him. Typically, a gasoline-filled tire is placed around a victim’s neck and set on fire.

The court ruled that Garay did not automatically qualify to stay in the United States. However, the 9th Circuit ruled a separate law related to torture could prevent his deportation. The panel ruled an immigration judge and the Board of Immigration Appeals had been incorrect in discounting Garay’s concerns about being tortured upon his return to El Salvador.

Garay’s attorney was hopeful he could remain in the United States under the Convention Against Torture.

If you face torture or even death on return to your home country, your asylum application will be very important. You can read more from our Austin asylum attorneys here.

Although an attorney is not required for asylum this is a vital application and you will only get one chance. At Peek & Toland , we will make sure that you meet all the deadlines for filing as well as the criteria for to maximize your chances of success. Contact our office today to get started on your application.