Earlier this year, Attorney General Jeff Sessions announced a new process to speed up the deportation of incarcerated undocumented immigrants who committed crimes. While the federal government is trumpeting the changes as a way of saving money for the taxpayer, expedited removal has alarmed some commentators.

Sessions sold the change as an “expansion and modernization” of the Institutional Hearing Program (IHP).

The revised IHP identifies undocumented immigrants who are inmates in federal correctional facilities. It will allow immigration removal proceedings to be carried out via video teleconference and removes the undocumented immigrant on completion of sentence, rather than releasing them to an ICE detention facility or into the community for an adjudication of status. 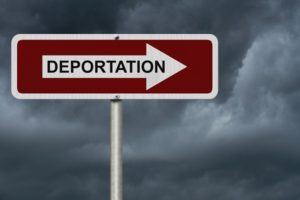 Sessions proposes bringing an Immigration Judge to the inmate to determine removability, rather than bringing the inmate before a judge. He said the change will save resources and speed up hearings.

“We owe it to the American people to ensure that illegal aliens who have been convicted of crimes and are serving time in our federal prisons are expeditiously removed from our country as the law requires. This expansion and modernization of the Institutional Hearing Program gives us the tools to continue making Americans safe again in their communities.”

A uniform intake policy was scheduled to be put in place by April 6. The number of facilities taking part in the expedited removal program will be expanded.

What Increased Expedited Removal Will Mean for Immigrants

A report in The Hill said new processes are likely to be used by the Trump administration to speed up its deportation program.

Trump has pledged to deport as many as 2-3 million undocumented immigrants with criminal records. However, the fact each person earmarked for deportation has a statutory right to a hearing, would make that aim almost impossible.

The Hill article said the backlog for hearings keeps on growing. At the end of January, it was 542,411 cases and the average waiting time to appear before an immigration judge was almost 700 days. If no new cases were presented, it would take more than two-and-a-half years to catch up with the backlog. Texas has the largest backlog in the country, we noted in a recent blog.

Even if the immigration judges did not receive any additional cases, it would take them more than two-and-a-half years to catch up.

However, Trump authorized an expedited removal provision in his executive order on immigration signed in January.

Expedited removal proceedings can be conducted by immigration officers. An immigrant without the proper documentation or one who has committed fraud or willful misrepresentation to get into the country may be removed without a hearing before an immigration judge under the order.

Undocumented immigrants subject to the expedited process must be detained until they are removed. Typically, they may only be released due to a medical emergency.

According to Omar Jadwat, director of the Immigrants’ Rights Project at the American Civil Liberties Union, the policy will face a legal challenge. He claimed the Trump administration is willing to “trample on due process” and even circumvent protections for vulnerable children.

Expedited removal is very significant. It is not clear how widely it will be used. The fact that the federal government is speeding up the deportation process means it’s vital to hire an experienced Austin immigration lawyer if you are facing deportation. Please call Peek Law Group at  (512) 399-2311.