New president Donald Trump made some tough promises about stop and frisk laws on the campaign trail.

A coalition from the right of the political spectrum is urging Trump and his attorney general nominee Sen. Jeff Sessions to make criminal justice reform a top priority during his first 100 days in office.

U.S. Justice Action Network said it shares Trump’s emphasis on public safety. It said dangerous criminals must be jailed and addicts and people with mental illnesses dealt with via “treatment-based” programs. 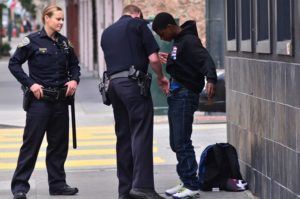 Timothy Head, executive director of the Faith and Freedom Coalition, who signed the letter, said his organization wants to advance criminal justice reform under the Trump administration.

Many conservative politicians anticipate action on stop and frisk.

During his campaign, Trump vowed he would be tough on crime, endorsing the use of controversial stop-and-frisk techniques. However, he appeared to qualify his comments, saying he was only referring to Chicago.

Trump paired his enthusiasm for “stop and frisk” with criticism of the Black Lives Matter movement along with a view that crime is out of control in minority areas of the inner cities.

What Is Stop and Frisk?

Policies of “stop and frisk” have been used in New York City for some time. However, black and Hispanic people were proportionally more likely to be stopped in the street than whites.

In 2013, Shira Scheindlin, a U.S. District Court judge in New York, ruled the city’s “stop and frisk” policy was in violation of the Fourteenth Amendment’s promise of equal protection because minorities were subjected to stops and searches at a higher rate than whites reported the Washington Post.

Stop and frisk means a police officer can stop a pedestrian if he or she has a “reasonable suspicion” that they committed a crime or is about to commit a felony or a misdemeanor.

“The Department’s own reports on its stop-and-frisk activity confirm what many people in communities of color across the city have long known: The police are stopping hundreds of thousands of law abiding New Yorkers every year, and the vast majority are black and Latino.”

As Austin criminal defense and immigration lawyers, we remain concerned about the notion of stop and frisk being extended given the implications of racial profiling and civil liberties.