There is a thin line between medical malpractice and knowingly putting patient lives at risk which becomes criminal conduct. In a recent case in Texas, a jury decided a neurosurgeon’s botched surgeries were criminal offenses.

Christopher Duntsch, 46, was convicted of first-degree felony injury over a botched operation in February. He faces life in prison, People reported.

Prosecutors said the surgeries of the Dallas doctor amounted to criminal conduct. He was accused of intentionally botching numerous spinal surgeries. His actions led to the deaths of two people and the paralysis of two others. 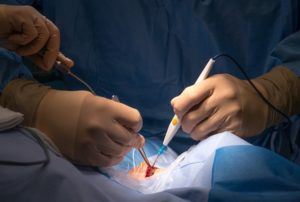 Christopher Duntsch was jailed for life for criminal misconduct

Duntsch was nicknamed “Doctor Death” by the media. Over the course of the three-week trial, the jury heard he frequently misdiagnosed his patients, performed unnecessary surgeries on them and botched several operations.

A patient told the trial he woke up paralyzed from the neck down after Duntsch performed an operation on him. Another patient almost died from an infection after a neck surgery went wrong, she told the jury.

Prosecutors originally charged Duntsch with five counts of aggravated assault causing serious bodily injury and one count of injury to a child, elderly or disabled person in 2015.

He was convicted of one crime – the botched surgery of Mary Efurd, a 74-year-old. She lost a third of her blood and the use of her leg, according to reports.

Efurd was operated on by Duntsch at the Dallas Medical Center in 2012. The procedure should have been a simple fusion of two vertebrae. She woke up in severe pain because her fusion hardware was misplaced in her soft muscle. The procedure severed her nerve roots and misplaced screw holes in her spine. The operation left Efurd confined to a wheelchair.

The Difference Between Medical Malpractice and Criminal Conduct

Often when doctors make a mistake in an operation and cause harm to a patient, their conduct will meet the civil standard for a medical malpractice, leaving them open to a potential lawsuit.

However, their conduct often won’t result in criminal charges. A doctor must have intentionally, knowingly or recklessly caused harm or been criminally negligent. In the case of Duntsch, a series of botched procedures led to criminal charges.

At Peek Law Group , our experienced Texas criminal defense team will leave no stone unturned in countering the prosecution case. Read more about our team here or call (512) 399-2311.