Mexicans living in the United States have been urged to “take precautions” by the Mexican government after a controversial and high profile deportation in Arizona.

The Mexican government issued a warning after the deportation in February of Guadalupe Garcia de Rayos.

The 36-year-old was deported after she reported to the U.S. Immigration and Customs Enforcement office in Phoenix. Her attorney said she showed up for a routine “check in” regarding an ongoing deportation case, the Los Angeles Times reported.

The detention and deportation of Garcia de Rayos sparked protests and made headlines in the United States and Mexico. 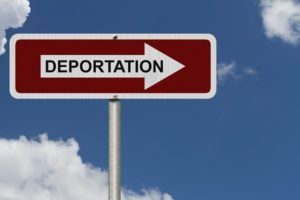 Mexico said the deportation reflected the “new reality” for the immigrant community under the Trump administration. On Feb. 13, U.S. Immigrations and Customs Enforcement conducted a sweep in Austin that resulted in the arrests of 51 immigrants, 23 of them with criminal records, reported the Statesman.

The Mexican Ministry of Foreign Affairs said the Mexican community in the United States faces a more severe application of migration controls.

A previous identity theft conviction led to the deportation of Garcia de Rayos.

The Los Angeles Times reported she grew in a small Mexican town 20 hours from the U.S. border. Her children are both U.S. citizens. They joined their father, who remains in Phoenix.

Garcia de Rayos lived in the United States since she was 14. Immigration agents arrested her during a workplace enforcement immigration raid nine years ago and convicted her of felony identity theft for having false papers that she used to secure work.

The felony conviction resulted in her deportation. The Trump administration said it is targeting so-called “criminal aliens” as it changes the deportation rules. The Mexican mother’s case underwent reviews at multiple levels, immigration officials stated.

The Los Angeles Times article pointed out the Arizona deportation has sewed seeds of anxiety in the immigrant community.

In Austin, the teachers’ union Education Austin sent its union members a flier with advice entitled “What to do if ICE comes to your door.”

The flier recommends immigrants against speaking with ICE agents or even permitting them entry. It urged them to remain silent.

The deportation of Garcia de Rayos alarmed immigrants because she was complying with the rules and her felony conviction was almost a decade ago.

At Peek Law Group, we are committed to keeping immigrant families together. It’s a tough time to be undocumented in Texas. We have successfully fought many deportations. Read our immigration success stories here. Please call us at  (512) 399-2311.