Drug smuggling appears to be rising at the border between the United States and Mexico as human trafficking falls due to tougher enforcement.

A Fox News report in May explored how the Mexican cartels may be responding to the decline in human smuggling by boosting drug smuggling.

Like any large corporation that responds to a sagging line of revenue, the Mexican cartels who control the border have replaced a decline in human smuggling with an increase in drug smuggling, the report stated.

Fox quoted border agents who said the cartels are seeking to replace their lost revenues from human smuggling with narcotics money. 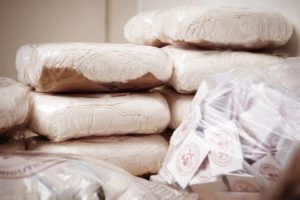 Drug smuggling increases at the border

“They need to make their profits somewhere. They were making so much money from human trafficking. Now that’s at a near all-time low, so they’re trying to make money on narcotics…marijuana, meth, and cocaine.”

The trend is most obvious in the Rio Grande Valley of Texas but is being seen elsewhere, according to the Fox report.

It noted the marked decline in the smuggling of families who come to the United States from Central America where gang crime and poverty is rife.

The smuggling of families from Central America plummeted from about 15,000 a month before the election of Donald Trump in November to less than 1,000 today.

The so-called “Trump effect” appears to have impacted illegal immigration, according to CNBC. In March fewer than 12,500 people were apprehended at the border, a 17-year low.  The Trump administration claimed credit due to the president’s strong stance on immigration.

Border Patrol figures point to an increase in drugs coming across the border. Since January 2017, seizures of cocaine rose 129 percent while methamphetamine was up 150 percent.

Officers say they have seen narcotics disguised as fruit such as limes, watermelons, and mangos. They have been apprehended in the gas tanks of cars and in milk containers.

In May, officers at the Hidalgo International Bridge intercepted a consignment of liquid methamphetamine with a street value of $3.8 million hidden in the gas tank of a Chevy Silverado.