Stricter immigration enforcement is consistently touted by the Trump administration but the message has left some farmers nervous. They fear a loss of foreign workers in the fields will impact their livelihoods.

A report in U.S. News stated the United States uses more undocumented immigrants in agriculture than any other country. It’s difficult to find Americans who want to do the kind of labor they perform on farms.

The report contained stark comments from Patricia Dudley who heads up Bethel Heights Vineyard in Oregon. 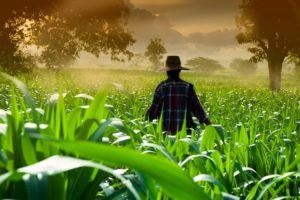 A team of about 20 Mexicans works the vineyard every year. She said native-born Americans have no desire to work as hard as the immigrants in cold and wet conditions in the hills of Oregon. She asked.

“Who’s going to come out here and do this work when they deport them all?”

The agricultural industry fears a crackdown on undocumented immigrants threatens to deprive it of the labor it needs to plant, grow and harvest the crops that feed the nation.

Experts say this is not a hollow fear. Agriculture uses a higher percentage of undocumented labor than any other industry in the country, according to a Pew Research Center study. The study found undocumented immigrants make up 5 percent of the population but a quarter of the agricultural workforce.

An analysis by the Associated Press based on data from the U.S. Departments of Labor and Agriculture put the figure even higher. It said immigrants working illegally in the United States accounted for 46 percent of about 800,000 crop farmworkers in recent years.

Immigrants working illegally in this country accounted for about 46 percent of America’s roughly 800,000 crop farmworkers in recent years, according to an Associated Press analysis of data from the U.S. Departments of Labor and Agriculture.

The U.S. News report cited some instances of agricultural workers who were rounded up. Apple pickers were detained in upstate New York and Guatemalans were pulled over in Oregon as they headed to a forest to pick a plant used in floral arrangements.

However, the new administration’s policies have yet to make a major dent in the agricultural workforce.

The warning signs are there. A U.S. Department of Agriculture study in 2012 cited “significant economic implications,” if America’s unauthorized labor force constricts 40 percent. Vegetable production could fall by more than 4 percent, the study said.

These are difficult and uncertain times for immigrants. The loss of foreign workers is clearly impacting agriculture. At Peek Law Group , we help foreign workers apply for visas to safeguard their time in the United States. Find out more about visas here or call us at (512) 399-2311.