Crimes against police officers have made headlines in recent months and led to new legislation. Recently, three police officers were wounded in a shootout at a Laredo convenience store.

Media reports stated a man who was wanted for questioning in a homicide was killed and three police officers were hospitalized following the shootout in Laredo, Texas.

Police hunted Antonio Gerardo Rodriguez in June after his 50-year-old girlfriend was found dead inside her apartment. 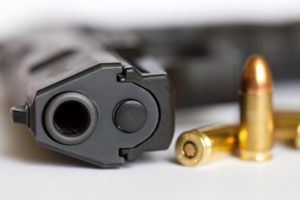 They spotted a vehicle matching the description of one driven by Rodriguez outside a convenience store later in the afternoon. When the officers approached the car, Rodriguez opened fire, drawing return fire from the officers.

The attack left one police officer in a critical but stable condition. The other two also suffered serious injuries.

Rodriguez later died at Doctors Hospital of Laredo, according to a report on CNN.

Lone shooter Micah Xavier Johnson, 25, of Mesquite, Texas, a military veteran who served in Afghanistan, targeted the officers during a Black Lives Matter protest in the city.

The massacre led Texas to pass legislation that makes all targeted crimes against police officers or other emergency responders hate crimes.

Texas Governor Greg Abbott said he wanted to “create a culture of respect for law enforcement.” He put his weight behind a campaign to educate young Texans on the value law enforcement officers bring to communities.

Under the legislation, the penalties for threatening peace officers or judges will be upped from a misdemeanor to a felony, punishable by 180 days to two years in prison.

The legislation likens the punishment to offenses based on crimes against groups identified by religion, race, disability, ancestry, age, gender or sexual preference under Texas’ existing hate crimes law.

Under the legislation, assaulting or unlawfully restraining a police officer or judge is a second-degree felony, which carries a prison sentence of up to 20 years.

Legislators had crimes like the shooting of Texas District Judge Julie Kocurek in Austin in 2015 in mind when they added judges to the bill at the 11th hour.

If you have been charged with a hate crime in Texas, you should hire experienced defense counsel. Call our Austin criminal defense lawyers at  (512) 399-2311.