New restrictions on skilled foreign workers coming to the United States are likely to put the squeeze on H-1B visas. But that has not stopped an Indian-based IT firm from setting up new innovation centers in the United States and planning to hire 10,000 workers.

Vishal Sikka, the Infosys chief executive recently said his company is committed to hiring 10,000 American technology workers over the next two years.

He said Infosys is making a three-decade-long “investment across the US.”

Infosys has pledged to seek out experienced tech professionals and recent graduates from universities and community colleges. It is looking to staff four new hubs in the United States.

The company says it will focus on innovation and technology, as well as serving client in manufacturing, financial services, retail, healthcare, and energy. The initial hub is slated to open in Indiana in August. Infosys says it should create 2,000 jobs by 2021. 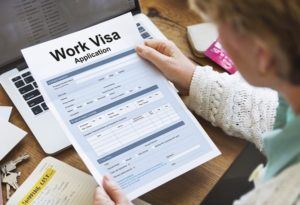 Despite the size of the potential job creation, Indian firms like Infosys and Tata Consultancy Services are under fire in the U.S. The Trump administration has accused them of bringing foreign workers from overseas on temporary H-1B visas and undercutting local jobs.

These IT firms rely on the H-1B visa program. Trump recently ordered federal agencies to hold a wide-ranging review of the program in an executive order. A report in DW.com said Indian IT firms have been accused of using the visa to send engineers from India to the US. They are paid less than their American counterparts, allowing the firms to keep down their operating costs, the report stated.

Although companies like Infosys have been accused of taking bulk visas, India’s IT industry body Nasscom claimed in a recent statement that Tata and Infosys – the country’s biggest IT companies – received 7,504 approved H-1B visas in 2015. That was just 8.8 percent of the total such visas given out.

In April, we detailed Trump’s executive order on H-1B visas. Companies are likely to end up paying more for skilled worker visas and a crackdown is likely on off-sourcing companies.

However, the executive order was short on details and leaves it up to the heads of departments to draw up recommendations to implement the order.

Trump has pledged to end the present system to allocate the visas which is a random lottery.

If you are seeking to use the H-1B visa program to bring a skilled worker over from another country, you should be aware of the potential pitfalls. It’s likely to become harder to apply for these visas in future. Contract Peek Law Group for assistance at  (512) 399-2311.