Crime in Round Rock makes fewer headlines than in larger cities like San Antonio and Austin. However, recent reports linked gang activity to a Round Rock crime spree.

A report on the TV station KXAN alluded to evidence that was recovered from the scene of a 7-Eleven Robbery in Round Rock on May.

Police said on the same morning as the robbery a teen allegedly murdered a man in the parking lot of an apartment complex in Pflugerville. The report said police in Pflugerville linked Robert Joseph Uribe to the killing of Jose Avidan Martinez, a 20-year-old who was discovered with a gunshot wound in the Place Apartments.

Uribe was arrested and incarcerated in the Williamson County Jail on a $1 million bond.

He is also said to have fired shots into the 7-Eleven store. KXAN reported nobody was injured.

Witnesses told police he met the victim Martinez on the same morning as the killing took place. No reason was given for the alleged meeting. 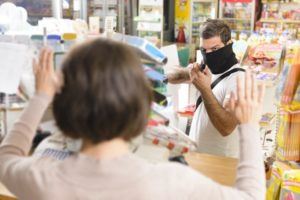 The report said police believe the homicide and the Round Rock crime spree were related to gang activity. They declined to identify the gangs alleged to be involved.

Another teenager, 17-year-old Anthony Rheinholtz, was arrested in connection with an alleged robbery at the 7-Eleven.

A third teen M’Kenzie Marzett, 19, was arrested on aggravated robbery changes. Police said they are linking him to a double shooting at Red Hills Villas in May.

Authorities found a man and woman with gunshot wounds, reported KXAN. They were transported to a local hospital. Both of the victims were reported to be in a critical but stable condition. Officers later said the suspects and victims knew each other.

An upsurge in gang activity is linked to a spike in crime in many Texas cities. In Dallas, police have warned of an escalating problem.

After downplaying the problem in the past, Police Chief David Pughes acknowledged that gang violence is driving up violent crime in the city. Violent offenses rose about four percent year on year.
Pughes told council members that the Dallas Police Department saw a 148 percent increase in drive-by shootings: from 49 to date last year to 122 up to May 2017.

Austin also saw a surge in gang-related incidents. There were two shooting incidents involving gang members in February which led to LBJ High school students being put on lockdown.

If you have been charged with a gang-related crime, you will likely be facing an enhanced sentence. Please call our Austin and Round Rock criminal defense attorneys for representation at  (512) 399-2311.