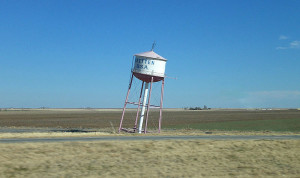 Travelling the many roadways and highways of Texas, you’re bound to come across some cattle ranches, barbecue pits, beautiful expansive fields, and other southern staples. You might be gazing out the car window, perhaps somewhat sleepy from a long trip, when you spot something out of the corner of your eye that makes you do a double take. At first, you might be thinking that you’re going stir crazy from exhaustion, but sure enough, it’s real. Texas is home to many roadside attractions that are inexplicable, unheard of, or just plain bizarre.

The Leaning Tower of Texas

Everyone has heard of the Leaning Tower of Pisa, but how about the one in Texas? Pass through the city of Groom and you’ll eventually come across an old water tower that’s precariously standing on two legs and looks like it’ll topple over any time now.

In 1980, Ralph Britten bought the tower from the nearby town of Lefors and literally hauled the whole tower over to his truck stop in Groom, all in one go. The tower was initially going to be used for water storage, but Britten had a better idea: why not use it to turn some heads? Attention is always good for business.

In a moment of sheer ingenuity, Britten worked with his men to bury one side of the tower partway in the ground, making it lean at an approximately 80-degree angle. The trick worked. Truckers and tourists alike flocked to the tower. Britten’s business gained a lot of new customers, mainly people who came out of curiosity. However, the good times didn’t last. An electrical fire ended the truck stop business permanently in an ironic twist of fate. Water would’ve been real useful then. Fortunately, the tower survived the destruction and still stands to this day.

In the rural town of Amarillo, the land, like in most parts of Texas, is flat, and it’s easy to spot anything that comes up in the horizon from far away. Imagine the surprise of passers-by when they see the statue of a giant, detached pair of legs sitting in the middle of a field. This strange roadside attraction is known as The Ozymandias Legs.

The odd statue’s namesake is a famous 19th Century sonnet, in which the ruins of a statue in the middle of a desert act as a metaphor for the fallibility of all humans, even those who hold great power. Very heavy stuff. It’s not definite whether this Texan tribute quite captures the somber spirit of the poem, but it certainly makes for interesting pictures.

American Kitsch is Half Buried But Still Alive

The Cadillac Ranch in Amarillo has been around for more than 30 years. It consists of 10 Cadillac tail fins protruding from a wheat field, as if 10 Cadillacs have been partially buried in the ground. It can be seen as the work of a hater of classic American vehicles, or it can be seen as a tribute to American kitsch. This surreal monument to old America has endured since its creation and is still loved by visitors and locals alike. The vehicle ends themselves are covered in graffiti and scrawls from people spanning multiple generations.

The Austin criminal defense lawyers at Peek Law Group, L.L.P. hope you enjoyed reading about these strange and fascinating roadside oddities in the wonderful state of Texas!