Paul Ryan, the House Speaker and one of the most prominent Republican politicians, has not always been known for inclusive views.

But when he joined 500 or so Georgetown University students on April 27, he emphasized his immigrant roots and struck a more measured tone on immigration, reported Fusion.net. 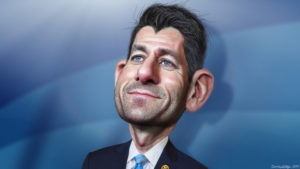 Like most of us who live in the United States, Ryan is descended from immigrants. His ancestors came to America from Ireland. He described immigration as a “beautiful story that needs to continue in this country.”

He also eschewed the term “illegal immigrants” used by many people in the GOP. Ryan instead spoke of “undocumented immigrants.”

Words carry a meaning in this context and ‘undocumented immigrants’ is a less derogatory term. Ryan’s views on immigration reform were also at odds with those of the GOP’s prospective Presidential nominee Donald Trump who has pledged to deport as many as 11 million migrants.

Ryan said at the town hall.

“I’m a person who believes that for the undocumented, we have to come up with a solution that doesn’t involve mass deportation, that involves giving people the ability to get right with the law, to come in and earn a legal status while we fix the rest of legal immigration.”

Notwithstanding Paul Ryan’s softer stance on immigration, he has refused to talk about immigration reform while President Obama remains in the Oval Office.

Obama’s comprehensive immigration reforms have been held up by Congress and in the courts. Obama’s deferred action orders were considered by the Supreme Court in the case of United States v Texas in April. The fate of about 4 million immigrants who lack documentation and would otherwise be deported, is in the balance.

DAPA would give some classed of immigrants who lack and have children in the country, relief from deportation.

DACA applies to some classes of immigrants who arrived in the United States when they were children, to stay in the country.

Immigration reform remains a contentious issue that splits the two major parties and the branches of government. If you are living and working illegally in the United States, you face the danger of being held and deported by immigration officials. Our experienced Austin immigration lawyers can advise you of your rights and provide you with the resources and information that you need to be more secure. Contact Peek Law Group at  (512) 399-2311.