Police in Texas often use the offense of speeding to pull over a suspect who is then tested for driving under the influence of alcohol. If we are pulled over, we assume the cops are using reliable systems. Alarmingly, this may not be the case. Texas police routinely use LIDAR, a system that has not been properly tested and was described by a court as “novel scientific evidence.” 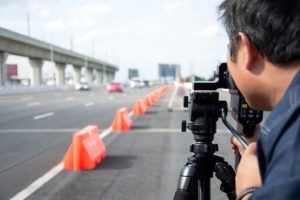 When motorists are pulled over on the suspicion of speeding the police may use RADAR. This system involves transmitting radio waves at a fixed frequency. Part of the beam that is transmitted reflects from the vehicle that is being targeted and bounces back to the radar. When a target is moving, a small change in the frequency occurs. It uses the “Doppler Effect,” which is defined as the change in frequency of the waves as the target moves away or closer to the location of the RADAR. The RADAR system is then able to calculate the speed of the target.

The courts in Texas have approved RADAR as a reliable technology but question marks linger over the use of LIDAR.

LIDAR stands for Light Detection and Ranging. A pulse laser detection system works by transmitting a predetermined series of light pulses with a specific time interval between each pulse to a target. The system then makes a calculation of the distance of the light reflected off a moving object and divides it by the time of travel to calculate the speed of a moving vehicle.

If you are pulled over for speeding by a police officer you are unlikely to have any idea about whether a RADAR or a LIDAR system has been used to calculate your speed. However, this could have a bearing on your rights, particularly if you are subsequently charged with a more serious offense such as a DWI.

In the 2008 case of Hall v State, the justices in the Court of Appeals of Texas considered the conviction of Phillip Hall. He had been found guilty of drunk driving by a jury, fined $1,000 and sentenced to six months in jail. The sentence was suspended, and he was placed on community supervision for two years. He appealed the case, claiming the arresting officer lacked probable cause because the State of Texas had failed to prove the reliability of the LIDAR device that was used to determine if he was speeding when he was initially pulled over. The arresting officer claimed he was driving at 76 mph in an area with a 65 mph limit.

The Court of Appeals heard evidence that the LIDAR laser device used was admissible by statute in every court in Texas. The judges noted that the state failed to cite any particular court decision or statute to support its claim. The state did use evidence to support the reliability of RADAR technology, but this was not the system used to pull Hall over for allegedly speeding.

The court ruled that LIDAR technology was “novel scientific evidence,” and it may only be admissible after it was judicially determined to be reliable at a hearing and reversed the judgment of the trial court.

The case left questions unanswered such as how much evidence of reliability is necessary before LIDAR is admissible as reliable evidence in a judicial setting.

You can read more about your DWI rights in Texas here. Most people who are stopped for speeding, don’t question the technology that’s used or realize that a subsequent conviction for a more serious offense can be overturned if the pretext for the original traffic stop was suspect.

If you are facing DWI charges, it’s important to make sure you have taken all necessary steps to make sure your arrest was justified. Our experienced Austin DWI attorneys will examine all of the evidence for potential flaws in the case against you. Call us today at F:P:Sub:Phone} for a consultation.