The open carry of guns has been allowed in Texas since the beginning of the year, but the new law threatens confusion that could end up in arrests.

The enactment of the law meant that for the first time in more than 100 years, Texans were able to walk the streets or travel the state wearing their handguns holstered. 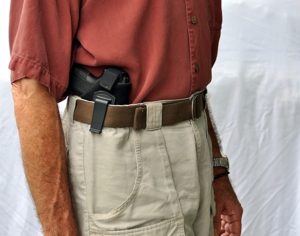 Although the law was controversial, it has not meant radical change for many Texans. However, an element of confusion about where it applies to threatens trouble with the law for some people who carry a gun. An article in McClatchy revealed more than 60 complaints have been filed with the attorney general’s office against venues that gun supporters say have unlawfully prevented them carrying their firearms.

In most cases, the office has decided signs that prevent open or concealed carry of firearms violate state law.

The article quoted Terry Holcomb, executive director of Texas Carry, who has been working with the attorney general on the issue.

He alluded to a certain degree of uncertainty that could land Texans with a criminal record. He said:

“Nobody wants to get arrested. We believe we can carry in certain places lawfully … but it’s a third-degree felony … everybody is unsure.”

A problem with the Open Carry law was graphically illustrated in July when a sniper killed five police officers in Dallas during a Black Lives Matter march. Dallas Mayor Mike Rawlings said the Open Carry law had blurred the lines between suspects and marchers for the police and meant it was more difficult to identify the sniper, reported the New York Times. Police gave media outlets a photograph of a suspect who turned out to be a legitimate marcher with a firearm at one point in the night.

Licensed Texans have been able to carry guns in government facilities, with the exceptions of court rooms and schools, for some time. There were no penalties for wrongly posted signs that banned guns until last year.

When laws are ambiguous, there’s always the danger of police incorrectly enforcing them.

The lack of a clear understanding about how to interpret the open carry law that increases the rights for almost a million active handgun license holders, could lead to wrongful arrests.

There have already been some instances of people being arrested for openly carrying guns. The site Open Carry Texas, points out citizens who are carrying firearms are only required to provide their identification and permit if they questioned by police.

See this information from our Austin gun offenses attorneys about firearms crimes in Texas.

The state of Texas enjoys plenty of freedom under the Second Amendment but there are stiff penalties for gun crimes if you are charged and some uncertainty about the interpretation of the open carry law. If you have been charged with a gun crime, call us now at (512) 399-2311