The mere fact that you are caught with illegal drugs does not mean you are automatically guilty of an offense. Texas has important defenses to drug possession.

To convict you of drug possession, a prosecutor must prove you knowingly and intentionally possessed or had control over a controlled drug. The drug must be one you did not have a valid medical prescription for.

In Texas, drugs fall into five classifications. You can be charged with a first-degree felony for possession of Cocaine, Heroin, Methamphetamine, LSD or Ecstasy. This means you can be jailed for up to life in prison for possession of these drugs. See our Austin drug defense lawyers page for more details. 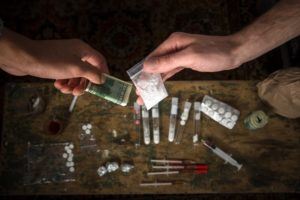 Drug possession has many defenses

Marijuana possession falls under a different classification. Drug possession is taken very seriously in Texas. Although traffickers are usually dealt with more seriously, you should not assume you will end up on probation for possession of drugs.

It’s not always simple to convince a jury that you have a valid defense to drug possession. It’s important to hire an experienced Texas drug defense lawyer to make the case for you.

Most drug offenses in Texas are listed under the Texas Penal Code and The Texas Controlled Substances Act. These are not straightforward statutes to interpret or to understand how they are applied in Texas.

While crimes such as drug trafficking and distribution are likely to be prosecuted in the federal courts, potentially leading to higher sentences, the federal authorities get involved in possession offenses too.

Possession of an illegal substance, the quantity found in your possession, and your purpose for having the drugs all come into play when authorities are deciding whether or not to charge you on a federal or state level.

In these cases, federal mandates will impose a minimum sentence that will often mean a convicted individual will face a lengthy prison stay.

The type of drug in your possession, the quantity, and your purpose for having the drugs are all relevant when the authorities are deciding whether or not to charge you at a federal or state level.

If you have been charged with drug possession or any other drug offense, you should act quickly and hire an Austin drug offenses defense lawyer. Call us at  (512) 399-2311.