Immigrants brought to the United States as children endured a rollercoaster ride in recent months as the future of the DACA program was debated. Although President Trump gave a safeguard about the program four months earlier, he suddenly announced the program would be rescinded this month.

Attorney General Jeff Sessions outlined the decision to end DACA at a press conference at the Justice Department on September 5. He argued that the program, originally created by President Obama, is unconstitutional and was an executive branch overreach.

The Obama administration announced the Deferred Action for Childhood Arrivals program in 2012, we noted on our website.

The DACA program includes almost 790,000 recipients. Its goal is to permit young people, most of them who lived the majority of their lives in the US, to work and contribute to their communities without fear of deportation.

Under the program, undocumented immigrants under 30, known as “Dreamers” gain the temporary right to live, work and seek education in the United States provided they pass background checks. They do not receive citizenship or legal status.

Four months ago, President Trump indicated the DACA program was safe. However, in August reports surfaced that he was considering scrapping it, noted CNN.

The Department of Homeland Security is providing a six-month window to consider pending requests, reported CBS. It will give Congress the chance to pass a legislative alternative to DACA. This means the program will end at different times for different recipients, expiring on a rolling basis. 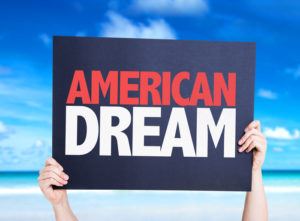 THe DACA program is seen as part of the American Dream

For Dreamers, the decision comes as a bitter blow. People who have been in the United States for many years, often since they were young children, face losing the right to contribute to their communities and even the possibility of deportation to their birth nations.

However, there remains uncertainty about what will happen in Congress and the decision will impact different DACA recipients in various ways. The issue took a new twist this week when Trump was reported to be hashing out a DACA deal with Democratic leaders on Capitol Hill that might save aspects of the program.

The main scenarios are as follows according to the CBS article.

USCIS will close all pending applications for Advance Parole associated with the DACA program. This is a permit allowing a non-citizen to reenter the United States after traveling abroad.

USCIS will honor the validity period of a previously approved Advance Parole. But if a person doesn’t have a previously approved parole application and travels outside the country, his or her departure would automatically terminate their deferred action under DACA.  Customs and Border Protection are unlikely to allow them to re-enter the U.S.

A wide range of legislators, non-profits and other agencies urged Trump not to end DACA, reported USA Today.

Texas Attorney General Ken Paxton, along with nine other state attorneys, issued an ultimatum to the Trump administration in July, threatening to take legal action. Paxton referred to the failure of the Obama administration to extend DACA after the former president’s executive orders were deadlocked at the U.S. Supreme Court. Paxton wrote:

“The courts blocked DAPA and Expanded DACA from going into effect, holding that the Executive Branch does not have the unilateral power to confer lawful presence and work authorization on unlawfully present aliens simply because the Executive chooses not to remove them.”

The action by Texas put additional pressure on the president to announce a new policy on DACA before a potential court challenge.

Although the government has reiterated its policy that anyone who is illegally in the United States could be deported, DHS officials made it clear criminals who are undocumented will still be the priority for removal.

These are difficult times for the so-called Dreamers in Texas and elsewhere. However, there is still an element of uncertainty about what will happen in Congress. If you need help with an issue related to the DACA program or another issue, please call our experienced Austin family immigration attorneys at (512) 399-2311.