Donald Trump’s successful presidential campaign went big on barriers between Mexico and the United States. The proposal to build a wall between the two countries dominated headlines. It raises unsettling questions about the future of Texas/Mexico trade, according to some commentators.

An op-ed in D magazine states Trump’s policies may not be beneficial to Texas. The stance may harm the vibrant business relationships built up between the Lone Star State and its southern neighbor.

The oil industry faces a hard hit. By renegotiating NAFTA and opening up America’s oil supplies to global markets, the international trade that goes through Texas is at risk. If the price of oil is driven down further, it may spell bad news for Houston and other Texas locations that rely on petroleum. 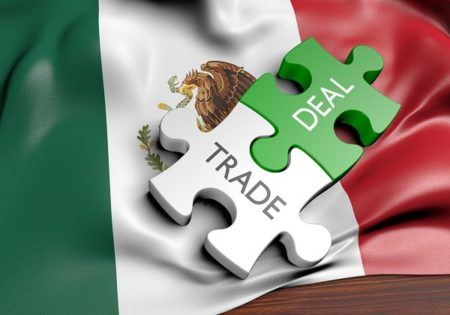 Given Trump’s passion for fossil fuels and his disdain for renewables, a downturn in Texas’ oil industry would come as a surprise to many.

Independent oil drillers and the fracking industry are expected to benefit from the Trump presidency.

However, the article draws a distinction between Texas and other Trump-supporting places like the “rust belt” states of Ohio and Pennsylvania.

The Retreat from NAFTA Could Hit Texas/Mexico Trade Hard

Unlike the northern states, as many as one in five jobs in Texas is dependent on international trade. Any retreat from NAFTA could have serious consequences for as many as 3 million people.

Texas is America’s largest beneficiary of NAFTA. The article states the under-fire agreement pumps nearly $500 billion into the U.S. economy every year. Nearly half of that investment ends up in Texas.

More than 3 million trucks cross into Texas from Mexico each year and approximately 2 million big rigs head south. The article estimates that by the end of the decade, 70,000 trucks will cross the 70 miles between Austin and San Antonio alone.

To this extent, the border is porous. While immigration hogs the headlines, Texas/Mexico trade is seldom mentioned.

Putting a brake on trade between Texas and Mexico could do serious harm to the Texas economy which in turn could help meet Trump’s restrictive immigration aims, commentators state. If recession hit Texas, fewer migrants will want to come here from Mexico.

These are uncertain times for immigrants and other Texans. If you need help with your family or business immigration issue, call our Austin immigration lawyers today at (512) 359-3362.