A speech made to Congress by President Donald Trump has led to ongoing speculation about a merit-based immigration system.

When Trump laid out his immigration proposals in late February, he advocated a broader plan that echoed mainstream Republican thinking by putting the emphasis on skills and employability rather than family ties. The New York Times noted this move drew a parallel between Trump and former President George W. Bush.

Trump advocated a merit-based immigration system in his speech. He said:

“It’s a basic principle that those seeking to enter a country ought to be able to support themselves financially, yet in America, we do not enforce the rule, straining the very public resources that our poorest citizens rely on.”

Although it’s not the first time a merit-based immigration system has been advocated in Republican circles, some members of the GOP are skeptical. They fear it could harm the economy by keeping out farm workers, laborers, hotel workers and other low-skilled jobs. Traditionally immigrants have taken these jobs which are unattractive to Americans. 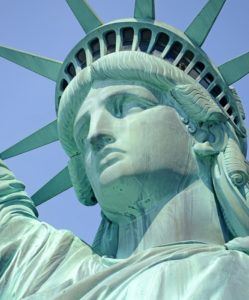 Trump has cited the Canadian system. Immigrants to Canada are awarded points based on their employment and educational backgrounds. Those who score the highest, get priority for admission.

While some Republicans are skeptical, the New York Times reported Democrats on the left fear a merit-based immigration system is a backdoor way of re-working America’s immigration laws to filter out people from some backgrounds from certain countries.

How a Merit-Based Immigration System Would Work

Most immigrants who are admitted to the United States are given entry based on their family ties. Less than a fifth are admitted via employment linked to their skills, while a small number are admitted as asylum seekers or refugees.

When U.S. citizens sponsor immediate family members they are not subjected to the caps experienced with employment-based visas. Legal permanent residents also apply for visas for spouses and children.

Of more than a million legal permanent residents who were admitted to the United States, 64 percent were immediate relatives of U.S. citizens or were sponsored by family members, the New York Times reported in 2014.

Just 15 percent received an employment-based preference and 13 percent were admitted as refugees or asylum seekers, according to the Migration Policy Institute.

If Canadian-style points based system is brought in, the most skilled and educated immigrants would get priority for admission.

An immigration proposal in 2007 that failed to make it out of the Senate, included a points-based system. Education and skills would have received more points than family relationships. Immigrants with family members living in the United States, either as green card holders or citizens, would have seen their visa preferences eroded. More employment-based visas would be granted under a merit-based system.

Recently, NPR spoke to Jessica Vaughan, director of Policy Studies at the Center for Immigration. The center favors less immigration. She said:

“It’s clear that if we were to change that mix by reducing the number of family-based immigrants, as has been proposed in recent legislation and – possibly that gives us the opportunity to increase the number of skill-based visas within the overall limits that we have now. That would be much more helpful.”

We also know a move to a merit-based immigration system would likely make it harder for families to be reunited here in Texas and elsewhere.

If you need help with an immigration matter in Austin, Round Rock, San Marcos, Bastrop, San Antonio, or Laredo, please do not hesitate to call us at  (512) 399-2311.