The Trump administration has repeatedly stated its willingness to deport undocumented immigrants. However, the system of deportation hearings is cumbersome and there is a massive backlog for hearing. Legislation passed in the summer may speed up deportations.

Two hardline immigration bills were passed in June. This legislation will penalize illegal immigrants who offend and local jurisdictions that refuse to work with federal authorities to deport them.

The bills, Kate’s Law and the No Sanctuary for Criminals Act, passed on party lines. President Trump tweeted that the legislation would make America safe again.

The No Sanctuary for Criminals Act is intended to prevent “sanctuary cities” that do not fully cooperate with federal immigration enforcement from receiving many federal grants. The Washington Post noted the law leaves sanctuary cities vulnerable to liability lawsuits from victims of crimes committed by undocumented immigrants. 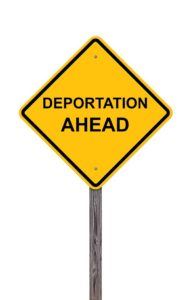 Bills would speed up deportations

The bill is intended to prevent local jurisdictions from holding up detainer requests from Immigration and Customs Enforcement (ICE), and speed up the deportation process for unlawful immigrants who commit crimes.

An article in The American Prospect said the legislation “would facilitate the administration’s drive to conscript local police officers into its “mass deportation machine.”

The Trump administration is reported to be assigning extra immigration judges to 12 cities with high immigrant populations to speed up the deportation process. They include El Paso and Harlingen, in Texas.

Kate’s Lawn was named after a 32-year-old woman shot dead in 2015 by an illegal immigrant who had been deported five times.

It increases prison sentences for criminal immigrants who re-enter the country illegally after being convicted and deported.

In June, John Kelly, the former Secretary of Homeland Security, said ICE deported nearly 66,000 people known to be or suspected of being in the United States illegally — representing a spike under the Trump administration. He said almost half of the immigrants who were deported had been charged with crimes or had gang affiliations.

Earlier last year, Attorney General Jeff Sessions announced a series of measures intended to speed up the immigration deportation process, we noted on our blog.

Sessions said these changes represented an “expansion and modernization” of the Institutional Hearing Program (IHP).

The revised IHP identifies undocumented immigrants incarcerated in federal prisons. It will allow immigration removal proceedings to proceed via video teleconference and removes the undocumented immigrant at the end of his or her sentence, rather than releasing them to an ICE detention facility or into the community pending an adjudication of status.

If you or a family member is facing possible deportation, call our Texas family immigration attorneys at  (512) 399-2311.